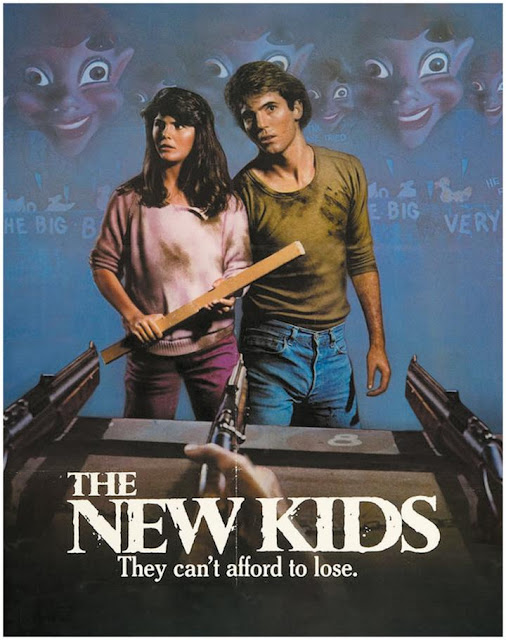 We break down 101-Films limited edition Black Label Bluray release of THE NEW KIDS. Check out our review.
The Film:

Released in early 1985 in the US, The New Kids stars Shannon Presby and Lori Laughlin as Loren and Abby, the titular new kids who move to live with relatives following the death of their parents (Tom Atkins and Jean De Baer). Arriving in a small town, Loren and Abby help their relatives set up a year-round Christmas theme park while attending the local high school. Here, Abby receives the unwanted attention of Dutra and his gang, and after Loren steps in to defend her the actions of the gang escalate to a deadly finale. Of interest in the film is that Dutra is played by James Spader in one of his early roles, although intriguingly he would also star in Tuff Turf the same year but this time in the role of the new kid.

The New Kids arrives on Blu-ray for the first time in the UK courtesy of 101 Films. The transfer looks okay, but a bit soft and detail could be better, while colours appear a bit faded. No details are provided as to where the transfer has come from. Sound fares better and is clear.

Commentary: Film critics Paul Hogan and Jasper Sharp offer a critical view of the film, touching on class issues and the nature of the ending, while also discussing the cast and crews previous and subsequent work.

Interview with director Sean S. Cunningham (18m): An engaging interview with the director around the gestation and filming of the project, as well as the casting choices and some on set stories.

Interview with writer Stephen Gyllenhaal: The screenwriter talks about how he came to be involved in the project and the development of the script.

Booklet: A booklet is included with two essays, one on ‘80s gang violence films by Jon Towlson and the other on Sean S. Cunningham by Barry Forshaw.

The New Kids is a very enjoyable movie, and the Blu-ray provides a decent if not excellent presentation of the film along with good extras to form a worthwhile addition to a collection. As such, this release is recommended.
Written by Rob Diston
REVIEW