'Wild At Heart,' 30 years later: The Making Of A Misunderstood Fairytale 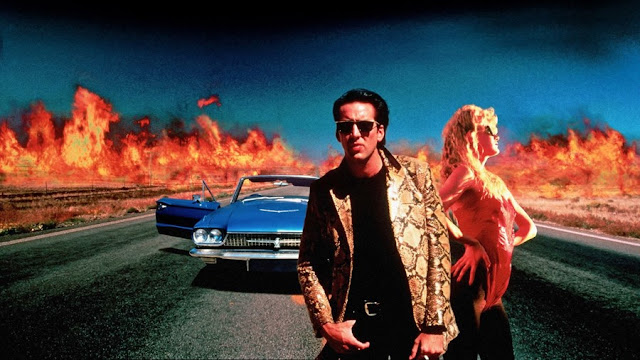 Released in 1990, David Lynch's southern gothic "Wild At Heart" remains as divisive and as deep a dive into Lynch country 30 years later. We explore the controversial fairytale of love, violence and chaos.

“This whole world’s wild at heart and weird on top”
It began in the summer of 1989. David Lynch had finished the pilot episode for 'Twin Peaks', a television series which would premiere in April the following year. His next move was to try and rescue two of his projects, One Saliva Bubble, and Ronnie Rocket. What did they need rescuing from Attached to the projects was De Laurentiis Entertainment Group, but when Dino De Laurentiis went bankrupt, the company got bought by Carolco Pictures. Contractual obligations prevented production from beginning, and Lynch would stop pursuing it as a viable project in the early 1990s. It’s worth noting he didn’t blame Dino for this, but noted that “when his company went down the tubes, I got swallowed up in that”.
Propaganda Films, an independent production company, commissioned Lynch to develop a screenplay, intended to be an updated noir based on a 1940s crime novel. Meanwhile, a novelist named Barry Gifford was writing the manuscript for 'Wild at Heart: The Story of Sailor and Lula', with two more chapters left to finish. He had been in contact with Monty Montgomery, an associate producer on 'Twin Peaks', as well as a friend of Lynch’s. Montgomery was interested in what Gifford was working on, so was allowed to read an early version of the publication while working on the pilot episode of 'Twin Peaks'. Two days later, he called Gifford, to say that he wanted to make a film of it. Two days after that, Montgomery came to Lynch while he was editing the pilot, and gave him Gifford’s book. He asked Lynch to executive produce a film he would direct, but Lynch worried he would read the book, fall in love with it, and want to do it himself. Montgomery was surprised, as he did not think this book was Lynch’s “kind of thing”.
In actuality, Lynch loved the book. He called Gifford soon afterwards, asking if he could turn it into a
film. He considered it the right thing at the right time, as “the book and violence in America merged in my mind, and many different things happened”. What drew him was a modern romance within a violence world, which he called “a picture about finding love in hell”. The director went to Propaganda Films about switching projects, and got approval. The only catch was that production would start two months after the rights had been purchased, which forced Lynch to work fast. He immediately thought of Sailor and Lula being played by Nicolas Cage and Laura Dern, so thank goodness he managed to get the pair on-board. Cage admitted he was enticed by “those passionate, almost unbridled romantic characters, and Sailor had that more than any other role I’d played”. This wasn’t the first time Dern would work with Lynch, but she saw it as her first opportunity to play both a sexual person, and somebody comfortable with herself. “She has no fear of anyone else’s judgement”, Dern said of Lula. “It’s just wonderful to be inside someone like that.”

“The way your head works is God’s own private mystery”

Lynch had the pair read Gifford’s book, and wrote the draft in the span of a week. In retrospect, the director would admit his first draft was depressing, to the point that no one wanted to make it. Lynch was also not a fan of the books ending, as he felt it went against what was established about the characters, and how they felt for each other. Film producer Samuel Goldwyn Jr. read an early draft of the screenplay, and agreed with not liking Gifford’s ending, so Lynch changed it. The director worried that such a change would make the film too commercial, but wanted to remain true to what the material was saying. Plus, he loved the idea of Sailor being “a rebel with a dream of The Wizard of Oz'.” Just one of the many wonderful references to 'The Wizard of Oz', borne out of the director’s love for the film.

During rehearsals, Lynch began talking with Cage and Dern about Elvis Presley and Marilyn Monroe, the clear real-life inspirations behind the main characters. The director later listened to a copy of Elvis’ Golden Records, and decided Cage had to sing two songs. “Love Me” and “Love Me Tender” where the chosen songs, and Cage agreed, recording them so that he could lip-synch them on the set. Before filming had begun, Dern made the suggestion that she and Cage take a weekend road trip to Las Vegas, as an opportunity for them to bond and get a handle on their characters. Dern recalled they both agreed that Sailor and Lula had to be one person, one character that the actors would share. “I got the sexual, wild, Marilyn, gum-chewing fantasy, female side; Nick’s got the snakeskin, Elvis, raw, combustible, masculine side”. Oh, and that Snakeskin jacket which is a symbol of Sailor’s individuality and his belief in personal freedom? You can thank Cage for that. At one point,he called Lynch to ask if he could wear the jacket, and it was duly incorporated into the script.

Filming began on August 9 th 1989, taking place in Los Angeles (including the San Fernando Valley) and New Orleans, working off a budget of $10 million. A notable scene has Willem Dafoe’s Bobby Peru visit Lula, claiming to need the toilet. Apparently, Dafoe is actually having a wee in the toilet, as he had previously drunk a lot of bottled water. What he didn’t know was that the toilet was not a working one, and later discovered this, and that some poor crew member had to clean it.

“Those are dummies… dummy”
When it came to early test screenings, things weren’t going well. The strong violence was seen as a bit much, and during the first test screening, a graphic torture scene caused eighty people to walk out. Lynch did not want to cut out anything from the film, and at the second test screening, one hundred people walked out during the very same scene. “By then, I knew the scene was killing the film”, Lynch recalls. He ended up cutting it down, so the scenes power remained but didn’t send people running from the theatre.
The film was set to debut at the 1990 Cannes Film Festival, in the 2,400-set Grand Auditorium, and it was only completed just one day beforehand. After the screening, there was wild cheering from the audience. Quite the contrast came later on, when Jury President Bernardo Bertolucci announced it had won the Palme d’Or at the awards ceremony. The news Lynch’s film won top prize met boos led by film critic Roger Ebert, reportedly drowning out the cheers. Despite being crowned victorious, the MPAA informed Lynch that, unless cuts were made, the version of the film which screened at Cannes would receive an X rating in North America (the NC-17 rating wouldn’t come into effect until after the film’s release). The director was contractually obligated to make an R rated film, so he made one notable change, where a character shoots their own head off with a shotgun. Gun smoke was added to tone down the blood, and hide the characters head being removed from their body.

“You got me hotter than Georgia asphalt”
Released on August 17th , 1990, the film opened in a limited release of 532 theatres. A fortnight later, the film went into wide release with 618 theatres, and grossed a total of $14 million in North America. Considering that’s just $4 million more than the budget, it wasn’t a good sign. Not helping matters were the mixed reviews the film received, with the aforementioned Roger Ebert calling it a dishonest movie. In spite of this, Diane Ladd received a Best Supporting Actress nomination at the 1990 Academy Awards, and the 1991 Golden Globes, for her role as Lula’s overbearing mother (Ladd was also Laura Dern’s real-life mother).
Garnering more success was the Chris Isaak song “Wicked Game”, which appeared in the film. David Lynch also directed a music video for it, which incorporated scenes of the film's characters with black and-white footage of Isaak performing the song. While the song was released as a single in 1989, it wasn’t until being featured in this Lynch film the song became a hit. You can thank Lee Chesnut for that, an Atlanta radio station music director who was a fan of David Lynch films. After seeing 'Wild At Heart' for a third time, he told the program director of Power 99 to put the song on the radio for two days. The song reached number six on the Billboard Hot 100 in January 1991, making it the first hit song of Isaak’s career.

While it may not have been as appreciated at the time, 'Wild At Heart' is certainly looked upon more favourably now. It ranked well in lists ranking the greatest films of the 1990s, with Indiewire placing it 47th, and Rolling Stone listing it at number 53. Considering the likes of 'Thelma & Louise', 'True Romance', and 'Natural Born Killers' would all follow, this could be considered a precursor to these acclaimed films about dangerous duos on the run. But at its heart, this is a romance of two kindred spirits trying to keep their love alive, and remains one of David Lynch’s best films. Barry Gifford turned the tales of Sailor and Lula into a series, continuing to as recently as 2015. Considering the cyclical nature of adaptations, don’t be surprised if somebody looks to adapt the series, but I wouldn’t expect that person to be David Lynch. Despite not slowing down with short films, the man hasn’t directed a feature film in 14 years, and 'Twin Peaks: The Return' seems to be the closest we’ll get to him making a sequel. For now, you’d be well off to take two hours of your time to revisit this gem, and swoon over the tender rendition of “Love Me Tender”.
Written by James Rodrigues
ANNIVERSARY ARTICLE CULTFILM FILM