Gremlins 2 At 30: Why 'The New Batch' Remains A Satire Classic 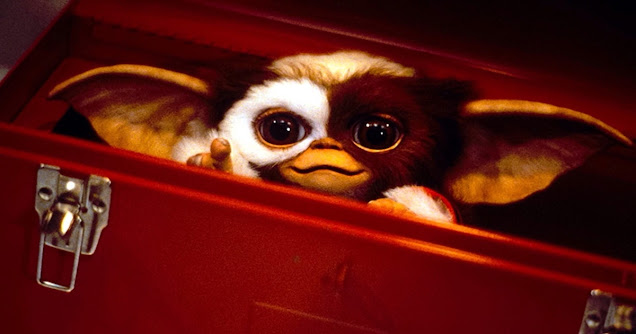 In 1990, audiences were unprepared for Joe Dante's sequel to horror classic GREMLINS (1984) - the satirical spectacle of chaos remains an undisputed masterclass in subverting audience expectations. We explore and examine the genius of GREMLINS 2: THE NEW BATCH 30 years on.
“Well, it’s rather brutal here. Right now, we are advising all of our clients to put everything they’ve got into canned goods and shotguns.”

As it opens on a Looney Tunes animation, director Joe Dante is letting the audience know what to expect. As we see Daffy Duck trying to attain the glory he thinks he deserves over Bugs Bunny, the tone is being set-up for those watching, to expect something light-hearted and cartoonish over the next 106 minutes. A contrast to how dark the original film got, but it’s clear this isn’t a studio making what they expect audiences to want from a Gremlins sequel. To coin a phrase from a popular podcast, Gremlins 2: The New Batch is Joe Dante’s blank check project, his ambition and unfiltered vision poured into the project, in the way he wanted.

“All they have to do is eat three or four children, and there’d be the most appalling publicity.”

Released on June 8th, 1984, Gremlins was both a critical and commercial success, and was the centre of large merchandising campaigns. Warner Bros. wanted to cash in on that, so director Joe Dante was asked to make a sequel straight away, but he declined. He saw Gremlins as having a proper ending, so a sequel would only exist to make a profit, and that didn’t interest him. On top of that, making the original film was a taxing experience for Dante, and he wanted to move onto other projects.
Despite not having the original director on-board, work continued onwards for the sequel. The studio approached various directors and writers, while considering storylines including sending the gremlins to new locations, such as Las Vegas, or even the planet Mars. None of these ideas stuck, and so the studio returned to Dante, and offered him the rare promise of complete creative control over the film, and a budget triple that of the original film. Dante agreed to make the sequel, and embarked on making what he’d call “one of the most unconventional studio pictures, ever.” A description that’s so on point, it inspired a glorious Key & Peele sketch.

“Fire: The Untamed Element, Oldest of Man’s Mysteries, Giver of warmth, Destroyer of forests. Right now, *this* building is on fire.”

Dante imagined this to be a satire of the first film, and sequels in general. This is evident in the self-referential moment of Billy trying to explain the mogwai rules, and being countered with questions that highlight how irrational these rules are. Most deliciously, film critic Leonard Maltin made a cameo appearance denouncing the original film, just as he did in real life, before being interrupted by the gremlins pouncing on him.

But the most ambitious moment comes an hour into the feature, as Dante tries to involve the audience into the story. As the film strip seems to break, the gremlins appear to have taken over the theatre, engaging in shadow puppets, and replacing the reel with that of a vintage film with constant nudity. It’s then up to Hulk Hogan to pop up as an audience member, and threaten the gremlins into resuming the running the rest of the film. It’s an ingenious moment that’s rightfully beloved, but the studio was afraid people would think the film was actually broken, and exit the theatre. To combat this, Dante got some people together for a preview of the film, and the real-life audience enjoyed it, while remaining within the theatre.

To build upon the ingenuity, the filmmakers replaced the scene for the home video version, to give the impression the viewers VCR had been broken by gremlins. The VCR’s channels would change, before stopping on a broadcast of Chisum, where it was John Wayne who forced the gremlins to continue on the film. The scene was brought alive thanks to a voice impersonation for the late Wayne, by actor Chad Everett, and can be viewed as a bonus feature on the DVD release. To add onto the ingenuity, the novelisation has the Brain Gremlin locking author David Bischoff in the bathroom, and briefly taking control of the novel, before Bischoff breaks free, subdues the gremlin, and the story resumes.

Originally, the film was supposed to be longer, but executive producer Steven Spielberg gave some advice. He claimed the film had too many gremlins, and thus, several scenes were cut. One deleted scene was set in Grandpa Fred’s studio, where he had “help” hosting the show by three of the main gremlins, Daffy, Lenny, and George. The trio were acting on the idea that Grandpa Fred’s show was meant to be scary, and although the scene wasn’t in the final film, it could be read in the tie-in novel.

The cast was made up of several returning members from the original film, including Zach Galligan, Phoebe Cates, and in an expanded role, Dick Miller. Hoyt Axton was supposed to return as Billy’s father, having invented special clothing for Gizmo, which would ensure he’d never come into contact with water again. Unfortunately, the scene was scrapped before it was shot, to save time on the production. There was time, though, to include many new faces to populate the Clamp Centre, starting with the mogul who named a building after himself, played to an exceptional degree by the great John Glover. Daniel Clamp was based upon the 80’s figures of Ted Turner and Donald Trump, and while the character was written as a villain, Glover brought an enthusiastic innocence to the role, which Dante believes persevered, and lightened the film overall.

Christopher Lee also appeared, playing the mad scientist known as Dr. Catheter, who just wants some diseases to toy with. Lee imagined the role to be a light-hearted one, but Dante thought overwise, and encouraged the legendary actor to play the role as evil, which would better match the atmosphere of the laboratory set.

But, for all the wonderful names attached, the films stars would always be the eponymous Gremlins. The original films special effects relied on Chris Walas, who had moved on to follow a career in directing, so Dante turned to Academy Award winner Rick Baker. Baker was not interested, as he felt it would be a case of putting too much work into the project, only to be a successor to Walas, rather than a creator in his own right. When it was suggested he could make a more diverse selection of gremlins, Baker eventually accepted the job. Puppetry was involved to bring the creations alive, but as technology had improved in the 6 years since its predecessor, stop motion animation was integrated, so the creatures can be seen walking more. Due to there being more gremlins, additional filming lasted five months, and much of the effects had to be finished after the actors had finished their work.

Upon its release, reviews were more varied for this film than its predecessor. A pattern seemed to emerge, as those who thought the first film was too dark were more positive on the sequel, while a colder reception was received from fans of the original film. When it comes to the box office figures, the film made $41.5 million off a $50 million budget. Compare this to the original, which made $212.9 million off an $11 million budget, and its clear audiences weren’t as enamored with the change in pace.

Perhaps audiences weren’t ready for the capitalist skewering which would be mixed in with the creature feature, but 30 years on, the sequel has been granted more love. The absolute audacity and razor-sharp wit have been welcomed with open arms, with some even calling this the best Looney Tunes movie ever made. Plus, the satirical elements on Clamp resonate even more, considering what’s become of one of his inspirations. As with many other beloved properties from long ago, there have been attempts to revive the Gremlins franchise. In January 2013, Vulture exclusively reported that Warner Bros. was negotiating with Steven Spielberg’s Amblin Entertainment to make a reboot. Seth Grahame-Smith, novelist of both Abraham Lincoln Vampire Hunter and Pride and Prejudice and Zombies, was tapped to produce, but in 2015, would state that the project had been put on hold. That same year, star Zach Galligan confirmed the film would not be a reboot, but “something along the lines of Jurassic World, where it will be 30 years later”. For ages, it seemed the closest we’d get to seeing gremlins on the big-screen again would be them featuring in The LEGO Batman Movie, but that seems to no longer be the case. In 2019, it was announced that Warner-Media greenlit an animated series, based on the franchise, for the HBO Max streaming service. Entitled Gremlins: Secrets of the Mogwai, the series would serve as a prequel to the films, following Gizmo in 1920’s Shanghai, as he goes on adventures with Sam Wing, a 10-year-old version of the shop owner Keye Lane would play in the films. Joe Dante is on-board as a consultant for the series, which is due for a 2021 release date. How will the first addition to the Gremlins franchise in over 30 years fare? Time will tell, but for now, it’s worth getting some frozen yogurt, joining in with a rendition of “New York, New York”, and reacquainting yourself with this comedic gem.
Written by James Rodrigues
ANNIVERSARY GREMLINS2THENEWBATCH