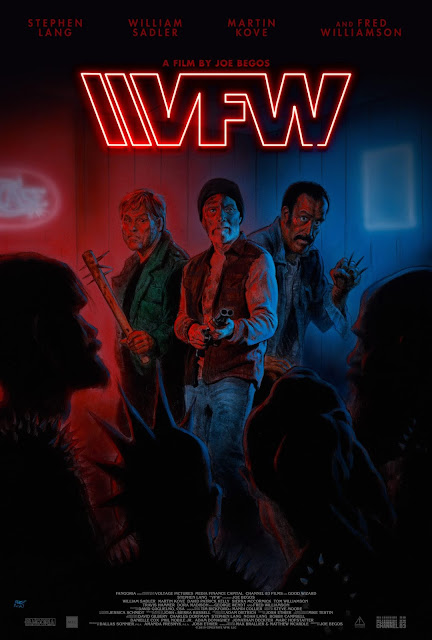 The latest offering from Joe Begos is a face-melting grindhouse symphony of aging veterans, punks and gore. For genre fans raised on Assault On Precinct 13 and Rolling Thunder, the ensemble cast and 80's style-violence will be pure-wish fulfillment. Check out our review.

I had no awareness of Joe Begos until Frightfest in 2019. As soon as the films were announced Bliss was immediately on my radar as something I HAD to check out. Watching the film was a hell of an experience and I was completely overwhelmed by the ferocious nature of the visuals, music, and sound design, all of them working together perfectly to create an escalation of sensory overload to a point where I wasn’t entirely sure if I enjoyed the film or just respected it, but I knew I had to see it again and would be sure to check out Begos’ other films.

VFW is Begos’ follow up to Bliss and his first time working on a film with a script he hasn’t written, but it’s still very much a Joe Begos film and features a number of previous collaborators including Josh Ethier as editor/producer/actor, Steve Moore providing the soundtrack, and Dora Madison as Gutter. Story-wise the film wears its influences proudly, essentially being Assault on Precinct 13 (itself influenced by Rio Bravo), but this time it’s a group of veterans defending themselves against an army of brain dead drug addicts intent on retrieving the drug lords stolen cache of drugs. This retelling of the Assault on Precinct 13 story is mirrored in an initial sequence of Stephen Lang’s Fred and Fred Williamson’s Abe driving to the titular VFW post, creating echoes of Ethan driving to the precinct in Carpenter’s classic, Steve Moore’s 80’s inflected soundtrack strangely evoking more of the dread of Prince of Darkness. VFW feels oddly unmoored from time, and without certain references to foreign wars or brands of drinks for sale it could almost be set in the recent past, with not a cell phone or modern device in sight, even the TV in the bar is an old CRT/VHS combo.


If the film falls down anywhere it’s in the characterisations, which are a little thin. The veterans come off best, a genuinely funny script showing the lives these men have lived together and the bonds that they have. Arguments between them are good natured and even when they come to blows, everything is forgiven quickly. The drug gang fares worst, but what character is shown serves to show that they are vicious and amoral, though nothing to the extent of killing a small child for no reason. But for the gang characterisation isn’t the point, they exist as a force to be repelled, endured, and survived, and in a lot of ways remind more of zombies (they are brain dead after all) when they attack en masse. It’s during these attacks that the film amps up the action and gore to a surprising degree. Heads are stomped, bludgeoned, and cleaved, limbs are hacked off, bodies explode, and I’m sure there’s a Cannibal Holocaust homage in there too, all of this happening in a visual palette drenched in reds and purples.


I can’t help but compare this in my head to Bliss, but that feels wildly unfair. Bliss was a personal project for Begos and working from someone else’s script means VFW will never be the same as that. I did find VFW to be less of a sensory overload than Bliss, making it a much easier watch, and in some ways I wish I’d seen them the other way round. Regardless of this, VFW gets a solid recommendation from me, and just like with Bliss, I can’t wait to see what Begos has in store next.

VFW is out now on DVD, Bluray VOD and HD Digital via Fangoria.