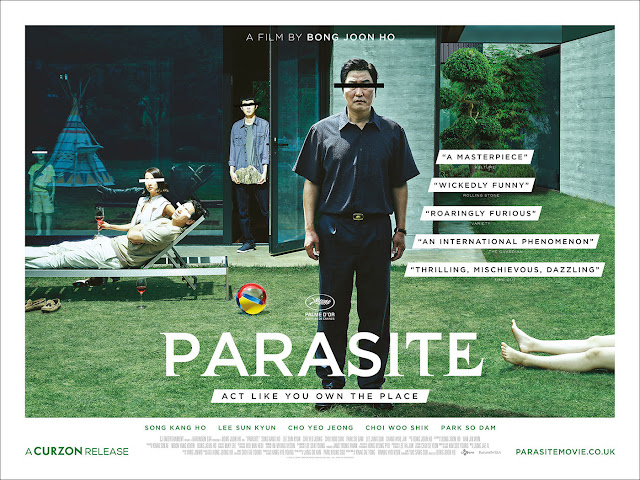 As Bong Joon-ho's Parasite continues to play at cinemas and expands to even more screens, Fly Fidelity contributor James Rodrigues offers his thoughts on the darkly funny satirical thriller. Read it below!

The UK hasn't had the best luck with Bong Joon-ho's filmography. While Mother and The Host are freely available to purchase, the exemplary Snowpiercer never got an official release until suddenly appearing on Amazon Video in 2018, some 4 years after its US release. If you wanted to watch Memories of Murder, you'd be looking at spending around £50 on an out of print DVD, which is more than is allowed for Barking Dogs Never Bite, Bong's directorial debut which would require importing another region's DVD. Frankly, we should be thankful Okja being a Netflix release ensured it could be watched worldwide.

Ever since it's world premiere at the 2019 Cannes Film Festival, director Bong Joon-ho's latest has carried a lot of attention and praise in its wake. The UK and Ireland unfortunately have the latest release dates for this film, and in the lead-up, has seen the vast number of awards nominations and victories heaped upon this piece of cinema. Now that it's arrived, the question becomes whether all of the acclaim has been warranted, or the victim of its own hype.

A word of warning; due to the unfolding nature of Parasite, the best way to see it is by knowing as little as possible. So, I recommend viewing it firstly, and then coming back to read this review. For anybody who continues onward, I shall do my best to be as vague as possible, to ensure you all remain unspoiled. The story following the Kims, a poor family barely getting by to survive, having to piggyback off free wifi to apply for jobs. Their son, Ki-woo (Choi Woo-sik), is given the chance to earn money by acting as an English tutor, employed by the rich Park family. Thus begins an opportunity, as the Kim family begin integrating themselves into working for the Parks, and closer to the wealthy lifestyle they aspire to be a part of.

Over the past year, more films have taken an interest in depicting the struggle with class, ranging from Hustlers to Joker. It's become a more prevalent topic, and for my money, few have done a better job capturing this than this very film. What the screenplay does, written by Bong Joon-ho and Han Jin-won, is craft a biting piece of satire, looking at the highlighted issue from the most fascinating of ways. Be it through the most flippant of actions, or non-chalant utterings of words, the divide is ever-present in some very interesting ways.

Despite the duplicity at the core of this story, there are no villains within this piece. While the Parks may be more exuberant with their wealth, each of these people are ultimately just trying to survive and enjoy their lives, through whatever paths they have to take. Each character is treated like a fully rounded person, and we fully understand each of their motivations, and reasoning's which lie behind their actions. Take the son of the Kim family, Ki-woo. He's struggled being poor for so long, to the point his family leave their windows open for free fumigation. When his wealthy friend's recommendation brings him into this rich family, he becomes determined to fit into that lifestyle, with the promise of wealth clinging to him.


Each cast member does exemplary work within their roles, capturing the essence of their characters so very well. It's easy to care for each one of them, because there's so much heart lying within, and no matter where the story goes, this core is never forgotten. But blimey, the film takes some unexpected routes within this journey. It can make you laugh so easily, put you at ease seeing characters interacting, and then become unbearable tense. Thank goodness that it all works, deftly captured by the phenomenal direction.

Considering how the story came about, initially going to becoming a stage production, it makes sense how much of this film is spent within the Park's exuberant home. Designed by a famous architect, it's a glorious setting with a clear history of its own, feeling like a very real place, symbolising the hopes of those not so financially successful. For my money, this home can be described in the same way as this film; one of the most phenomenally crafted things in a long while. Go into this film blind, and come away ready to recommend it to whoever you can.