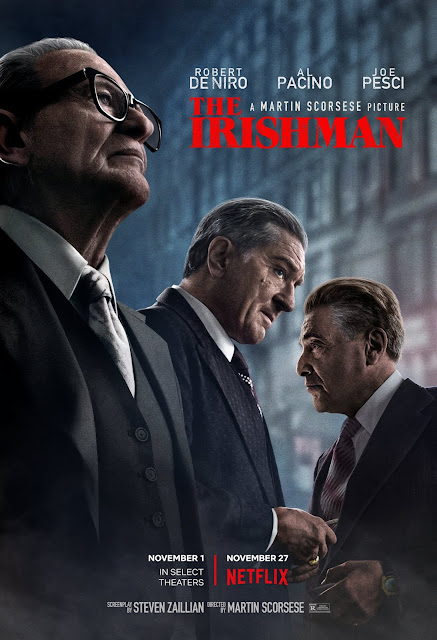 Martin Scorses's 10 year in the making mob epic is one for the ages with an uncharacteristic focus on reflection and regret. Check out our review!

Based on the 2004 book, I Heard You Paint Houses, Charles Brandt's novel chronicles the life of Frank Sheeran, an alleged mafia hitman who confesses to the crimes he supposedly committed for the Bufalino crime family. One of the many who read the novel was Robert De Niro, who brought the story to the attention of Martin Scorsese, while becoming quite emotional in describing the lead character. The film entered development in 2007, and was officially announced 7 years later, to be Scorsese's next feature after Silence.

Paramount Pictures were originally set to distribute the film, but they dropped it due to the rising budget. Enter Netflix, who bought the film rights, and put the necessary money forward to help Scorsese realise his long-gestating project. A part of this involved the vast use of de-aging technology, so the actors could portray their roles over the course of many decades, to convey the passage of time on these characters faces. When we see the visual effects early on, it admittedly takes some getting used to, but as the film runs on, you become accustomed to what you're seeing. This wonderfully combines with the actors physical portrayals, as ones becomes less aware that they're witnessing the latest leap in effects work, and are made to believe they're following these characters throughout many points of their long lives.

When it comes to Robert De Niro, his filmography has become a mixed bag. His most impressive turns, such as The King of Comedy and The Godfather Part II, are overshadowed by the likes of Dirty Grandpa, and the Meet The Parents trilogy. By reuniting with his long-time collaborator, De Niro turns in a performance that's set to remind viewers of the powerful turns he is capable of delivering. The required physicality is portrayed well for somebody who regularly "paints houses", committing the executions with a cold efficiency, as though it's just part of an everyday job. But he also does an effective job in capturing Sheeran's beating heart, who wants to look after his family, and satiate both mentor figures in his life. Not since Carol has a character's longing to speak on the phone been so phenomenally communicated.

What drives the narrative is the push and pull between Frank Sheeran's close friends, who clash over their differing styles and ideas. The time is taken to sell Frank's close relationships with the pair, so seeing him at the centre of it all makes for compelling viewing. It also helps that such brilliant portrayals go into the pair, no matter how much they contrast with one another. Al Pacino is on bombastic form as ever, but while he settles into the showy performance he's known for, that isn't all there is to his portrayal. We're told Jimmy Hoffa was as popular as Elvis, and the charisma put into this depiction lends credence to that idea. On the opposite of that is Joe Pesci, returning to acting alongside his most famous collaborators. But his performance isn't as volatile as we tend to see, instead being a more measured turn from the actor, but retaining the usual power in a more quietly chilling manner.

As this decades spanning tale covers these characters lives, Martin Scorsese feels at home in this story, while it never comes off as a retread of his prior works, It's a terrific showcase for his deft handling, as no moment in the 209 minute runtime feels wasted, while flitting throughout the expansive task, and between tones, with such confidence. In the same film, he delivers one of the most hilarious uses of watermelon in cinema, and suddenly makes a car-set scene one of the most tense moments in all of 2019. A special mention is deserved for Anna Paquin, who conveys so much while speaking so little. She may not have a lot to do, or dialogue to say, but the way she looks at her father speaks volumes, magnificently depicting how Frank;s actions resonate with his family, whether he knows it or not.

But the best is saved for last, as the final act is where Scorsese's latest truly excels. Side-stepping the obvious ends we tend to see in gangster films, Steven Zaillian's script takes a more reflective path that ends up being pretty haunting. As the years pass by, the biggest worry is no longer the potential act of violence, or the politics involved in your higher ups. The only combatants left are the ravages of old age and time, where the good moments are little more than a fading memory, those you cared for are gone, and all that's left are the weight of past actions. It's the perfect ending to this impressive tapestry that's been woven about the life of Frank Sheeran, and will leave you to wonder where those 3 and a half hours have gone.

The Irishman is available in select cinemas, and on Netflix.