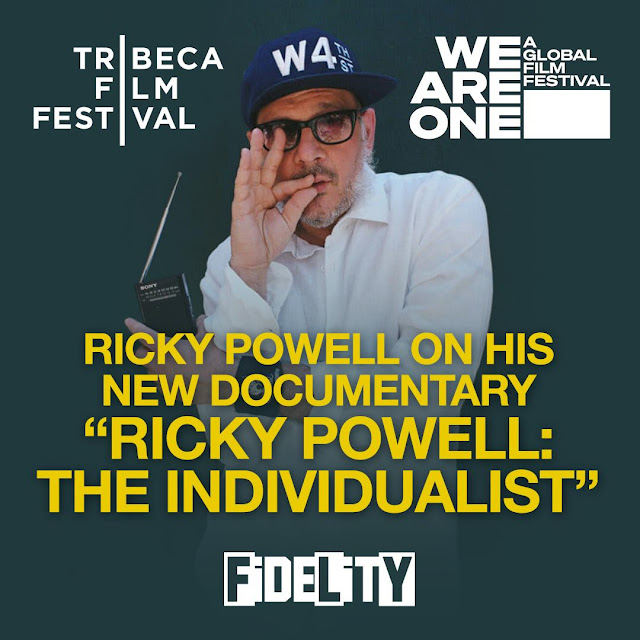 Among its programming curated by Cannes, the Berlinale, BFI London Film Festival and over a dozen other festivals, one marquee stands out at the We are One Festival: Josh Swade's documentary about the iconic street photographer, Ricky Powell.
"It's called 'Ricky Powell: ‘The Individualist' and it's pretty in-depth", reveals Powell over a call just days before the announcement that YouTube has partnered with Tribeca Film Festival to premiere the documentary, as part of an unprecedented 10-day digital film festival, Saturday 30th May.

"It was so fucked up because the crew put in so much work and had just wrapped up and finished editing in mid-to-late March, then all of a sudden Corona-virus happens. It was quite shocking".

The documentary is one of two about the self-proclaimed lazy hustler in just less than a year, the other titled 'Through The Lens', which Powell reveals was made last October and documents his years as a photographer in the Def Jam days. However, it was never was released due to clearances with music; a common set back in his hip hop circles.

"I don't need the attention. Some people crave attention, I don't", he assures. Yet, after documenting some of the most important counter-cultural developments in recent history, he has deservedly earnt it. From candid snapshots of pop-art luminaries Keith Haring and Andy Warhol, to key innovators of the hip hop and graffiti scene of mid-80's New York, Ricky "The Rickster" Powell has long been a part of New York City's cultural fabric.

Nicknamed the fourth Beastie Boy, Powell wants to break free of living in the shadows of his affiliation and work with the Beastie Boys, who recently released their documentary "Beastie Boys Story" on Apple TV last month. "We just kind of went different directions and we don't really acknowledge each other anymore, it's different", he says.

"I knew Adrock from the village growing up in the same neighbourhood, even though I was five years older than him, we used to play ball and hang out in the same school-yard. I went to check them out and I thought they were cool at this little gig they did and I went backstage after and said, "hello", and Adrock introduced me to the other two and then we became friends and started hanging out with them - that fall of ‘85 - into the spring of ‘86".

Of so many memorable tours - ones, which have since gone down in folklore amongst the lucky relative 'few' who attended them - there are two to date that reign as people's favourites: Run DMC's "Raising Hell" (1986) and the Beastie Boys "Licensed To Ill" (Beastie Boys and Run DMC, 1987). "I started taking pictures in ‘85, so it just kind of worked out that I was hanging with them and taking pictures of them, then they came on the "Raising Hell" tour in ‘86, I showed up on that tour in Florida for a week and when the "Licensed to Ill" tour came, they asked me to come on tour as a photographer. They asked me to be the luggage guy on the "Check Your Head tour" in ‘92 and on the Lollapalooza tour in ‘94. They were good times but I got other things going on now".

Not necessarily a household name but arguably on his way, Powell's forays into other creative industries over the past two decades reinforce this desire to operate in his own lane as a leader - an individualist and New York native original. "There's a lot of personal shit in this documentary", he exclusively shares. "I was dreading my shit to be out there like that. It features a lot of interviews with a lot of different people about me. LL Cool J has some nice things to say about me in the trailer. As a lone wolf dealing with all kinds of people and myself, I've gone through different twists and turns over the years. There's a lot of shit in the documentary, it’s like a montage almost. They even digitalised my camera recorder videotapes from the early ‘90's and incorporated those things, which consisted of a lot of shit like street shit in New York from my old public access TV show, 'Rappin' With The Rickster', shit on tour with the Beastie Boys, when I did a lot of filming."

This Saturday, the iconic photographer adds to his legacy with a documentary that will back his work and provide the archetypal narrative, with which to understand this unprecedented era of explosive, artistic and musical innovation with a dose of much-needed humour for the world right now.

"I told the director and crew, you can make it straight-up and serious but please put a humorous tip on it, that's important to me. I just want it to be entertaining", he says before assuring that “I don't need a documentary to give myself any hype. I just want it to be interesting and humorous and hopefully inspirational to people".

It is only natural that a documentary on him captures the urgency and the diversity of a New York minute. His work has resulted in living documents emerging from the Golden Era of hip hop, as the key individuals who defined it; Powell’s powerful and intimate shots of LL Cool J, Public Enemy, Run DMC, Eric B, Rakim and of course The Beastie Boys, have long since become iconic reference points in mapping the evolution of the genre’s rise from its subcultural roots to the social mainstream.
"Ricky Powell: The Indvidualist" is playing at "We Are One: A Global film festival Saturday 30th, May at 05:30pm EST. Watch the official trailer for Josh Swade's latest project in the video below.

Ricky Powell: The Individualist from Tribeca on Vimeo.