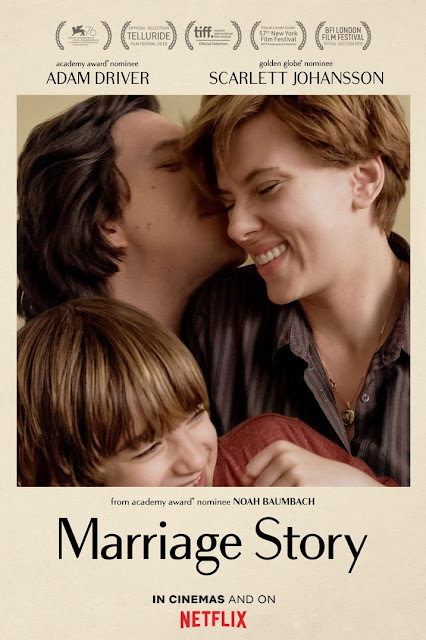 Marriage Story explores the pain, tragedy and confusion of divorce like no other, standing out as a career highlight of Noah Baumbach.

His seventh feature released this decade, Noah Baumbach closes it out with a personal feeling tale, depicting a couple going through a divorce. At the centre of it are stage director Charlie (Adam Driver), and actress Nicole (Scarlett Johansson), both of whom are known for their highly regarded collaborations. Our introduction to them is through voice overs, highlighting what aspects they love about each other. But these intercut moments aren't romantic declarations, but rather an exercise in marriage counselling.

As the divorce papers get served, the pair agree to an amicable split, hoping to make the process less painful than it needs to be. But when lawyers are hired, the best intentions turn toxic, and long simmering resentments burst forth. Baumbach's script captures the breakdown of a marriage for the painful experience it is, showing how messy it becomes as two people are left to figure out what's next, in their attempts to move forward.

What's key here is how balanced these characters portrayals are, with the film refusing to side with one over the other. Yes, a number of their actions are notably worse, but neither side is painted as outright saintly, or despicably villainous. These characters are approached with shades of grey, never pretending they should be models of perfection, but flawed beings who should learn from the past, and aim to become better.

Portrayed by Adam Driver, Charlie loves where he is in life. His focus is working as a theatre director for his New York company, while adoring his role as a father, and being part of a family with Nicole. As the legal proceedings get underway, the doting father finds himself at a loss with how his life is changing, becoming overwhelmed with what the legal process requires of him. He just wants his family to go back to how they were before, but is faced with the risk of losing custody of his son, and the distance between them is putting a strain on this parental relationship. Driver does exceptional work in conveying it all, and during a saddening trick or treat experience, you'll just want to hug him.

Charlie may be content with his life being as it is, but he's neglected the wants and dreams of his spouse. Depicted by Scarlett Johansson, Nicole has long put what she desires on hold for Charlie, which all comes out in a heartbreaking conversation with her lawyer. After separating, Nicole is enjoying pursuing what she's long wanted, and is done feeling small. She loves being back in Los Angeles with her family, while her career is blossoming thanks to starring in a television pilot. She wants things to remain civil, but is ready to stand her ground for what she wants, and Johansson does a magnificent job in portraying what her character is feeling.

In spite of how things turn out, we care for these characters with relative ease, so it becomes saddening to see the proceedings turn into a street fight. Mud gets slung all over the place, as words and occurrences are twisted, in an effort to score points for their respective sides. It becomes less about doing what's right for Henry, their son, and becomes a game of trying to win against one another. It's difficult to watch, as the good intentions are thrown out of the window, overwhelmed by the realities of the legal process, leaving toxicity in its wake.


After returning to the Toy Story franchise, Randy Newman delivers a phenomenal score that fits this feature. It doesn't take away from the scenes, delivering heavy handed attempts at telling you how to feel, but rather compliments what's happening on-screen, accentuating the sorrowful moments of the story. But it's not all a soul-crushing experience, as humour is peppered throughout the 136 minute runtime, delivering necessary moments of levity among the saddening feature. The messiness which comes with divorce is depicted very well, taking two well meaning parents wanting to do what's right, and turns it into a down and dirty fight over the smallest of things. It's a beautiful way to get your heart utterly broken, and won't leave you in a hurry.

Marriage  Story is available to watch now on Netflix.