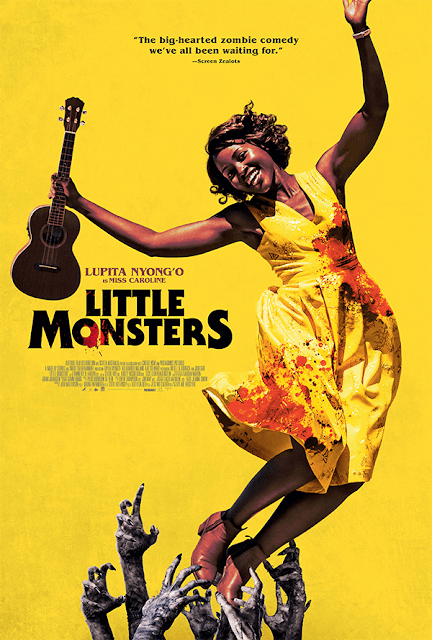 With "Little Monsters" Lupita Nyong'o delivers her second performance in a Horror film this year, but does it have the "brains!" to stand out as a fresh example of the genre? Read our review to find out!

Faced with leaving his child in the care of their teacher, writer and director Abe Forsythe has taken a unique approach to working through his fears. A story born out of parental worries, it sees a

kindergarten teacher Miss Caroline (Lupita Nyong'o) teaming up with washed up musician Dave (Alexander England), to protect her young students from a sudden zombie outbreak. Their protection comes in the physical sense, but the pair also wish to preserve the children's innocence, so make out that the nightmarish ordeal occurring is an elaborate game of tag they must win.

Through bundling this fantastic little premise into a feature film, Abe Forsythe has tapped into what makes horror work so well, and endure the ravages of time. Taking very real fears which many can relate to, and transposing them into a horrific scenario, which can be appealing to potential audience members. Central to it working is Lupita Nyong'o, racking up another fantastic performance in a 2019 genre film as Miss Caroline, a teacher whose priority is the well-being of those children under her care. She's just as ready to takes their minds off the terrors with her Ukelele playing, as she is to cut through swathes of the undead to get a necessary item. The engaging performance brings the character alive, ensuring she feels utterly real in the middle of such a fantastical premise.

What a shame she wasn't the films lead character. Instead, the focus is cast upon Alexander England's Dave, an uninteresting man-child that can't accept he's a washed up musician, and is a chore to spend time with. Granted, this is all to set up the eventual character growth he undertakes, but when our introduction to him is through blazing rows between him and his then girlfriend, it's difficult to stick with him. More interesting is Josh Gad, delivering a hilarious turn as Teddy McGiggle, a children's personality who reveals his blackened soul when the zombies come a-knocking. A foul-mouthed man who copes with alcoholism, out to save his own skin, it's a fun turn on the more family-friendly roles he's known for, especially Olaf. All of which adds up to an entertaining gem which has its eye on relatable issues, but would've improved if it followed the better lead character.

Little Monsters is available to watch in select cinemas, and on NowTV and SkyCinema.