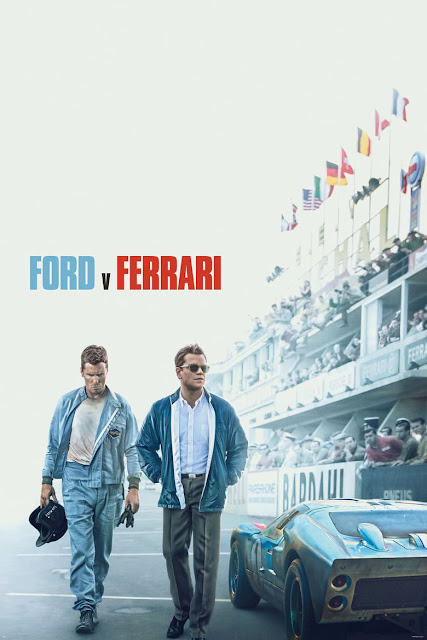 The latest feature from James Mangold fuels its running time with a story that takes a front-seat. James Rodrigues gives his two cents.

To recite a famous quote often shared on social media, "find a job you enjoy doing, and you will never have to work a day in your life". This is what has been achieved by Carroll Shelby and Ken Miles (Matt Damon and Christian Bale), both who have made careers doing what they love. Carroll designs and engineers automobiles, and Ken races them when he isn't working in his garage. The pair are hired to work for Ford, tasked with building a new racing car, intended to beat Ferrari at The 1966 24 Hours of Le Mans race in France.

Whether you know it as Ford v Ferrari, or Le Mans '66, this latest film by James Mangold is an exceptional piece of work. At a glance, it's the story of a real life war between two automobile giants, vying for dominance, but at the centre of it all, this is the story of two men doing what they love, caught in the middle of a pissing contest between two corporations. It helps that the screenplay, written by Jez Butterworth, John-Henry Butterworth, and Jason Keller, takes the time to make us care for the key players, buy into the relationships depicted, and make the scenes of characters just talking feel utterly engaging.

But what's most impressive are the racing sequences, which are utterly thrilling to watch, while also being downright terrifying. This is a perfect showcase for how this sport can go from an exciting thrill ride to a horrific near-death experience, all in the blink of an eye. It's especially worth commending how some of the races occur during night-time, or in rainy weather, and are actually visible to human eyes.

Front and centre of this film is Carroll Shelby, a man hired by Ford to help reach their goal, but is stuck in the middle of trying to please everyone. He must cater to the whims of Ford businessmen, while not leave his friend in the dust, and all while trying to achieve Henry Ford II's want to beat Ferrari. It's a lot for the character to take on, and despite an affable attitude, he has to cause some upsets to do what he believes is right, and Matt Damon does exceptional work in capturing all of this.

While Carroll is caught in the middle of business politics, Ken Miles just wants to get behind the wheel and overtake the competition. A struggling mechanic that can't keep his garage afloat, he wants to look after his family, but is a racer at heart. He may have impressive racing skills, but corporations are put off by his hot-tempered nature, so Carroll Shelby offering him a chance to race for Ford is a dream come true. Behind it all is a tremendous performance from Christian Bale, who gets to use his original British accent while magnificently depicting the many facets of his character.

Also key to this story is Henry Ford II, played by Tracy Letts. After trying to make a deal with Ferrari, Ford finds himself and his company personally insulted, which lights a fire under him to one-up his competitor, and Letts does great work in playing this role. There's also Josh Lucas as Leo Beebe, portrayed as a slimy Ford Executive that's always on-hand with an idea, put forth merely for his own personal gain. He does very well in depicting the antagonistic figure, and one gets the impression some of his suggestions are merely thrown in there to cause friction. If there's one thing you must take away from this film, be it how this is a brilliant acting showcase all around.

If I had any issues, it'd be how little there is for Caitriona Balfe to do. As the only female character of prominence, she's left to play the typical wife role, whose usefulness extends to conversing with her on-screen husband, and looking after their child. When the performance is played so well, it's a shame the character is left sitting on the sidelines, despite her clear knowledge of automobiles. There's also an emotional development which comes into play very late, and unfortunately feels tacked on, while being handled as such. Otherwise, this is a brilliant picture which makes a 2 and a half hour runtime speed on by with such ease.