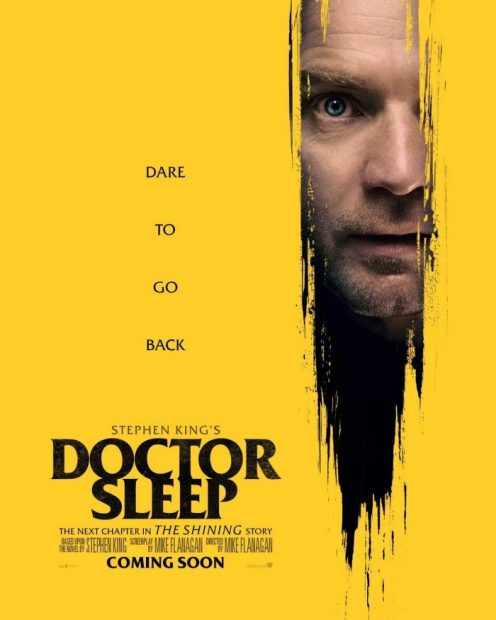 James Rodrigues shines a light on Mike Flanagan's sequel to "The Shining".

The years have not been kind for Danny Torrance. Now going by Dan (Ewan McGregor), he remains traumatised by his horrific time at The Overlook Hotel over 30 years ago, turning to alcoholism as a coping mechanism. Through telepathic communications, he befriends Abra (Kyleigh Curran), a young girl he must protect that's being hunted by The True Knot, a cult that preys on young children that have Shining abilities, in order to stay young.

The public first met Danny Torrance back on the release of Stephen King's third published novel, 1977's The Shining. It was a tale containing autobiographical elements, as it drew influence from King's personal recovery from alcoholism. The years passed after the novels release, but the author often wondered what would've happened to Danny after the novels events, leading him to release a sequel in 2013. When it came time to adapt the sequel into a film, there was one more factor to consider; 1980's feature film adaptation, The Shining.

When Stanley Kubrick delivered his cinematic adaptation, released just 3 years after the novel, the narrative had been streamlined, and what had been created is one of the most unsettling and iconic pieces of cinema to this day. In spite of this, King's dislike for this film adaptation has been widely documented. With so much going on in regards to this one story, there was a large job ahead of whoever was tasked with adapting the sequel story. Enter Mike Flanagan, who has previous experience in cinematic tales originally derived from a Stephen King story. Serving as writer and director, Flanagan attempts to bridge together Kubrick's feature film and King's original novel, while also adapting the 2013 story, and somehow makes it seem like an effortless task.

Central to this film is Ewan McGregor, in the role of Dan Torrance. Decades may have passed on by, but Dan remains haunted by the past traumas he endured at The Overlook Hotel, and has turned to alcoholism to suppress his powers. He's fearful of once more encountering such horrific occurrences, due to his Shining abilities, but also understands that he's inherited the monster which once tormented his father, and McGregor exceptionally conveys all of these elements. We may have only borne witness to a few moments from the past years, but the way McGregor portrays Dan, we're made to believe that he's been living in his own personal hell since 1980, and is finally ready to step out of such darkness.

A key factor to help him is Abra, a young girl who has her own Shining abilities, and acts as a telekinetic pen pal for Dan. The pair bond over their unique gifts, and are further thrown together when Abra is noticed by an insidious group, interested in her powers. As much as Abra just wants to be seen as a normal teenage girl, she knows that she cannot ignore what her abilities are showing her, and is more than ready to act against these antagonistic forces. This is best seen in a visually stunning dream sequence, which is a glorious showcase for the potential of these characters abilities in ways we haven't seen before. It may be her feature film debut, but Kyliegh Curran is an utter revelation, capturing each facet to her character in a tremendous fashion, and even managing to upstage her more seasoned co-stars.

What forces Dan and Abra to team up are a Manson family style cult, known as The True Knot, whose promises to new members are to live long and eat well. But their eating habits are not focused on eating five fruit and vegetables daily, or watching their calorie intake. No, their appetites are satisfied by ravenously feeding on the steam produced by those with Shining abilities, during moments of great pain, and especially in their dying breaths. This is depicted in the films most horrifying sequence, which certainly earns its 15 rating, and won't leave your memory anytime soon.

In an unprecedented move for 2019, Rebecca Ferguson isn't wasted in an antagonistic role. She portrays Rose The Hat, the head of The True Knot who seeks out the children, because the steam is necessary for her family to stay alive. It's welcoming that the time is taken to believe in these familial relationships, and to understand their reasons for these horrific actions, but that doesn't make them any less monstrous. This is clearly depicted in contrasting moments, where Dan and Rose each try to help people pass over. Dan uses his abilities to recount their beloved memories, and help ease their passing, while Rose recounts the persons horrific deeds, reminding them of how feared they were throughout their bloody history, which she believes to be the most comforting and integral aspect of their life.
Throughout the first two acts, Mike Flanagan has woven the original tale into this next chapter of Dan's life, while ensuring the latter can stand apart on its own. Enough breadcrumbs have been dropped about the 1980 film, so those who haven't seen it aren't lost with what's going on. Those are necessary for the third act, when the film fully leans into its cinematic predecessor, and goes full-on in referencing Kubrick's feature film. Shots are recreated, iconic areas of the Overlook Hotel are revisited, past spectres make a return. It's understandable is one feels this is too fan-servicey, but it feels like a necessary conclusion to this story, and doesn't come at the expense of anything integral. It's the grisly bow on top of a gripping and haunting 152 minutes, which flies by with the speed of a film half its length. Rest assured, this is a worthy sequel to the Stanley Kubrick's chilling original.